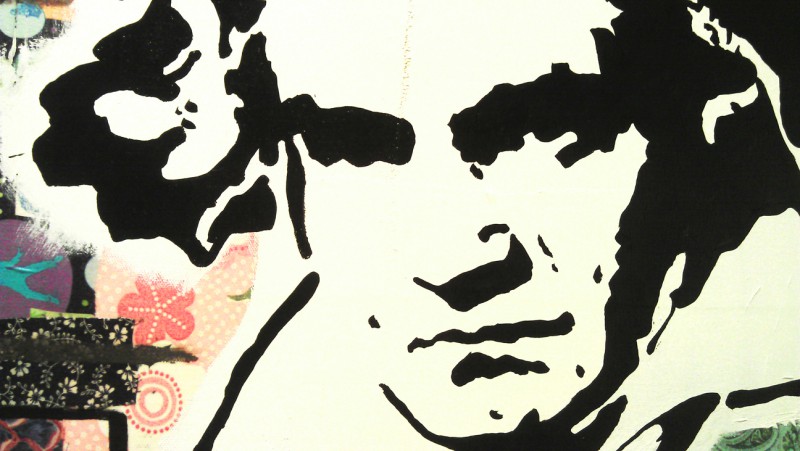 Michael Miller, Out of Commerce

An Artist Talk with Jasmyne Graybill will take place before the opening reception on Friday, January 18 from 5:00 – 6:00pm.

Out of Commerce features the work of Michael Miller and includes a group exhibition with former students and Texas A&M University, Commerce alumni: Trenton Doyle Hancock, Daniel Kurt, Lawrence Lee, Robyn O’Neil and Jeff Parrott. This year, we celebrate Michael Miller and his 20 year career as an influential artist, painting professor, and Director of Studio Art Graduate Studies at Commerce. Miller’s subversive collages have encouraged countless students, most notably the five artists included in group exhibition. Selections include pieces that show a strong connection to the artist’s time spent working with Miller, and their education at Commerce.

Born in Fort Worth, Texas, Michael Miller has contributed to the Texas art community since the 1980’s. Miller received his BFA from Texas State University, San Marcos and his MFA from the University of California, Davis. Miller was a Core Fellow, Artist in Residence at The Glassell School of Art, The Museum of Fine Arts, Houston. Michael Miller has exhibited across the region including solo exhibitions at Moody Gallery, Houston, and most recently with Barry Whistler Gallery in Dallas. Miller’s work is part of numerous private and public collections, including The Museum of Fine Arts, Houston and The Dallas Museum of Art.

Daniel Kurt studied at Texas A&M University, Commerce from 2007-2011, after attending Eastfield College from 2006-2007. Kurt has exhibited across north Texas since 2008. Recent solo exhibitions of his work include Saving Knowledge Stimpy with Plush Gallery and Secret Fun (Project 2): Every Painting by Daniel Kurt (invisible Solo Show) at Secret Fun, Dallas, Texas. Kurt creates derelict montages of embarrassing personal foibles. His paintings and drawings are informed by a diverse sphere of the artist’s interests.

Lawrence Lee earned his BFA in 2002 from Texas A&M University, Commerce and his MFA from the Maryland Institute College of Art in 2010. Lee has exhibited locally and nationally including, IAM Gallery in New York, New York, Rohrer Fine Art, Laguna Beach, and has been with Barry Whistler Gallery since 2006. Lawrence Lee is in the public collections of the Dallas Museum of Art and The Museum of Fine Arts, Houston. Lee’s small and powerful graphite, ink, and tea stain drawings tell intricate stories from a hauntingly whimsical and tragically poetic world. Lawrence Lee is represented by Barry Whistler Gallery in Dallas, Texas.

Robyn O’Neil lives and works in Los Angeles, California. O’Neil received her BFA from Texas A&M University, Commerce and attended the University of Illinois, Chicago where she obtained the Graduate Studies in Fine Art, University Fellowship. O’Neil was the Hunting Art Prize recipient in 2009. She has exhibited nationally and internationally with the Susan Inglett Gallery, New York, NY, Praz-Delavallade, Berlin, and Dunn and Brown Contemporary (now Talley Dunn Gallery) in Dallas, Texas. O’Neil’s work is included in permanent collections of numerous museums and private collections including the Whitney Museum of American Art, New York City, New York, Modern Art Museum of Fort Worth, Fort Worth, Texas, and the Dallas Museum of Art, Dallas, Texas. Robyn O’Neil is represented by Talley Dunn Gallery in Dallas, Texas.

Jeff Parrott earned his BFA at Texas A&M University, Commerce and recently earned his MFA in Painting and Drawing at the School of the Art Institute of Chicago. Parrott is featured in volume no. 102 of New American Paintings: Juried Exhibitions in Print. Parrott recently presented Working On It, a solo exhibition with Ro2 Art. The exhibition featured beautiful, color-rich works created with a diverse mix of multidimensional surfaces and materials. The works reflect the artist’s escapist love of color, lines, and texture. Jeff Parrott is represented by Ro2 Art in Dallas, Texas. His current show, Spun, is on view at Ro2 Art – Visit Addison through January 26.

The MAC is pleased to welcome San Antonio artist, Jasmyne Graybill. Graybill explores nature’s resilient ability to adapt and reinvent itself through the medium of sculpture and installation. Graybill explores how our constructed domestic environments negotiate between nature and domestic life. In Flourish, Graybill sculpts polymer clay into minute colonies of fungus, lichen, and mold that graft onto existing manmade objects. On display are a series of modified decorative plates and kitchenware that present stages of transformation that the invented bacterial cultures create. These fictional organisms respond, traverse, and emphasize the object’s original topography and patterns, remaking characteristics in their own image. As thin doilies of color or tufts of mold-like growth spread over the object’s surface, these hybrids work like a counterpoint and respond to the idealized representations of nature found in domestic patterns.

Jasmyne Graybill received her MFA at the University of Texas, San Antonio in 2008 and Currently living in San Antonio, Graybill teaches drawing and painting at Northeast Lakeview College. As an active artist, she has exhibited regionally and has received numerous awards and grants. Last year, Graybill had solo exhibitions at Women & Their Work in Austin, TX and at The Dishman Art Museum at Lamar University in Beaumont, TX. In 2010, she was awarded the DMA’s Kimbrough Artist Grant and in 2009 received “Best In Show” at the Texas National 2009 (the Cole Art Center @ the Old Opera House, Juror: Mel Chin). her BFA at the University of North Texas in 2003.