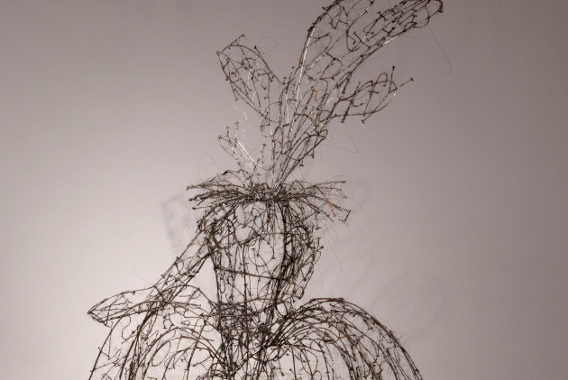 Oan Kim is a French photographer, video artist and musician. The series of photographs titled Fanfares take the viewer into a world of music with imagery that will immediately bring to mind night life and New Orleans Jazz culture. Kim is able to capture the energy of the night club in a beautifully candid way. He works loosely, much as the musicians do, improvising as he goes to give himself freedom from predictability and contrived compositions. Over the years he has developed an approach of the medium that is not strictly documentary, nor purely conceptual, narrative or pictorialist, but it is informed by all of the above, re-questioning the balance of these elements at every new series of work.

Oan Kim will present a thirty minute solo musical performance accompanied by a video projection at the opening reception. The performance is composed of indie rock songs with jazz undertones. The use of brass instruments as well as the energy of the music recalls the Fanfares photos. The video accompanying the performance consists of stills from Fanfares as well as old black & white movie clips.

Lesley Dill’s work is characterized by the complex interweaving of a wide range of materials, techniques, images and text. Dill works in sculpture, photography and performance to explore themes of language, the body and transformational experience. Her original syntheses of text and image combine language and the human body with a unique emotional directness.

Lesley Dill was born in Bronxville, New York in 1950 and grew up in Maine. After graduating from Trinity College in 1972 she completed an M.A. at Smith College in 1974 and received an M.F.A. in 1980 from the Maryland Institute College of Art. The artist currently lives and works in Brooklyn, New York.

Reflecting on the violent changes to Mexican society and its relentless struggle to cope and contain, Hugo Garcia-Urrutia presents a vision far from reaching any fast and lasting solution. His site-specific installation, Making A Killing, overtly draws the viewer to the harrowing number of people that have literally been coerced into or harmed by this deadly business of drugs, kidnapping, extortion, theft, and murder.

Garcia-Urrutia will engage the viewer in seeing the installation as an abstract sculptural object with a unique texture and size, sharing equal parts fear, tragedy and beauty. The surface is bullet-perforated to remind the viewer how close we are to this violence. As we walk outside this cube which contains the violence, we see the walls are too thin and at some points the bullets have flown out.

Originally from Ciudad Juarez, Hugo Garcia-Urrutia has regularly created work which reflects his architectural training. Receiving a Bachelor of Architecture and Design from Texas Tech University, Garcia Urrutia worked as an architect for five years before founding the Decorazon Gallery in Dallas’ Bishop Arts District in 2004. He has participated in national and international art-architecture competitions and public projects including the 2000 National Urban Poetry I Competition sponsored by AIA Cincinnati and International Architecture Competition sponsored by the magazine ARQUINE in 2005. Currently he is the artists in residence for The Fairmont Hotel in Dallas. Exhibition sponsored by John and Anne Mullen.

The MAC will exhibit a selection of works by Lloyd Brown from his series The Loneliest Road in America. The Loneliest Road in America series references Brown’s childhood travels across the 500-mile drive from Fillmore, Utah to Reno, Nevada. Outpacing an Oncoming Storm, a seven paneled piece, considers a different way to describe US Highway 50. The format emphasizes structure where the horizons of each landscape combine and document phases of travel. The region informs the way Brown thinks about light and instability. “It is a feature of any horizon and key to a sense of depth in painting. It is a nice return to mending miles of silence strung along by power lines and waves of sage known as The Loneliest Road in America.”

Lloyd Brown was born in Kingston, Ontario in 1957. Brown received his Bachelor of Arts in painting at the University of Nevada and has attended the Masters Workshop at Southampton College in New York.