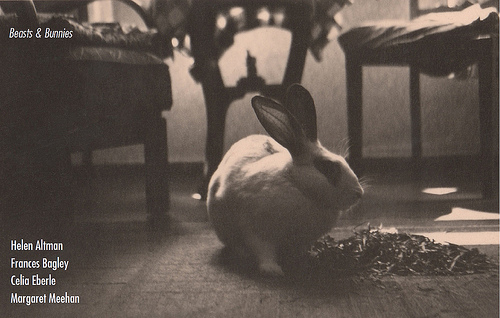 Beasts and Bunnies is a group exhibition that investigates the phenomenon of four artists’ crossed aesthetic paths involving animals literally and conceptually as subject matter. The exhibition features an installation titled Call and Response.

Animals have appeared in varying cultures, religions, mythologies, literature, art and entertainment throughout history. This project will bring together four artists to investigate “the animal” both literally and metaphorically. Helen Altman, Frances Bagley, Celia Eberle, and Margaret Meehan have all worked using animal imagery before and share a similar sensibility. Through sculpture, painting, photography, works on paper and video these artists each push and prod at the boundaries between nature and culture as well as the assumed distance between animal and human behavior.

As a group, they will look at the symbolism of the animal body and the tension between wild and domesticated. Using critical reflections on social and gender issues, the exhibition will cause the viewer to look deeper at what is “animal” and consequently at their own human nature.

Helen Altman lives and works in Ft. Worth, Texas. Altman earned her MFA from the University of North Texas, Denton, in 1989. Frances Bagley lives and works in Dallas, Texas and received her MFA from The University of North Texas, Denton. Bagley’s work is included in museum and corporate collections including The Dallas Museum of Art, The El Paso Museum and the National Museum of Women in Washington D.C. Celia Eberle’s professional record spans over twenty years with work that has frequently garnered critical attention. In 2007 she completed a residency in sculpture at the School of Visual Arts, New York. Her work can be found in the Dallas Museum of Art and numerous private collections. Margaret Meehan has exhibited across Texas and the United States. Meehan is currently living and working out of Austin, Texas. Her drawings and sculpture-based installations derived from 19th c. daguerreotypes let the innocent collide with the monstrous, evoking race, gender, and empathy for otherness.

The photographs in Revised/Remodeled reference the view seen through the windows of a suburban house and collectively explore the relationship between window and picture, domestic space and gallery space, reality and representation. Starting from Mary Warner Marion’s observation that a simulation might be understood as “a category between the real and the false,” this work is situated in the space between the simulation and the depiction.

Birds of Lint is a whimsical exhibition decorated with bird sculptures made of dryer lint, wire, thread, yarn, buttons, colored foil, sticks, dried flowers, seeds, shells and any other specimens the artist can get her hands on. The birds of lint fit quaintly into Chapman’s ethic of recycling. Isabelle’s work is a homage to nature and creating beauty out of the ordinary.

Isabelle Scurry Chapman has studied art at the University of Houston, Rice University, and Glassel School of Art. Isabelle has exhibited her work extensively throughout Texas with exhibitions at the Galveston Arts Center and The Michelson Museum to name a few. She released, Birds: A Collection of Verse and Vision with poet, Jim Blackburn in 2009. Her awards include a 1994 Mid America Art Alliance/National Endowment for the Arts Fellowship, two grants from the Cultural Arts Council of Houston/Harris County (1998, 1999), and a 2006 Mayor’s Award for her work with Art Bridge, an art program for homeless children.