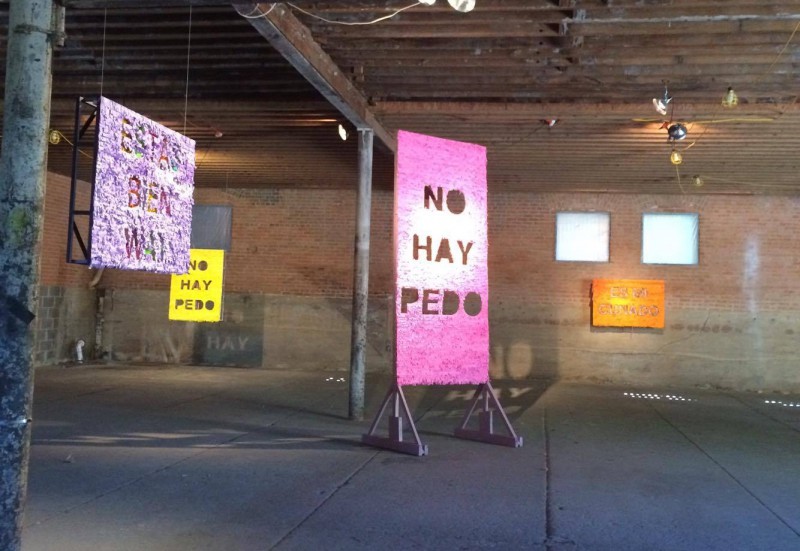 All are Invited – Free and Open to the Public.

To conclude the current exhibition, Forged Utopia by Giovanni Valderas, The MAC is hosting a panel discussion. In his new works, Giovanni Valderas confronts culture, history, and origins in order to bring awareness to the marginalization of Latino communities through gentrification. This discussion is supplemental to the topics addressed in Valderas’ work – linking the impact of gentrification on the Latino community in Dallas and how the arts can play a role in this relationship.

The Vice President of Arts at KERA News and leader of Art&Seek, Anne Bothwell, will moderate the discussion. Panelists will include Sofia Bastidas, Melanie Ferguson, Marcos Ronquillo, Giovanni Valderas, and Carol Zou.

The panel discussion will be held at neighboring Ro2 Art on Saturday, June 25 at 2 p.m. The evening will conclude with a closing reception for Forged Utopia at The MAC from 6-9.

More about the panel…

Sofia Bastidas
Sofia Bastidas is a curator and producer who works with artists, scholars, and organizers in the interest of creating communication towards the changes of urban development in the United States in correlation to the Global South. After graduating from Florida International University with a B.A. in Art History and a focus in Contemporary Art, Bastidas created Dwelling Projects. Dwelling Projects is a traveling residency program that enables partnerships with creative intellectuals in the United States, Latin America, and the Caribbean. Bastidas has also curated many exhibitions in Florida, Puerto Rico, and Ecuador. Her recent work includes a co-curatorial project, Port to Port, which hopes to bring together international port cities for multi- and interdisciplinary care.

Marcos Ronquillo
2015 mayoral candidate Marcos Ronquillo is a successful businessman and community leader with a proven track record of bringing people together to build consensus and solve some of Dallas’ biggest challenges.

As a highly respected Dallas attorney, Ronquillo has represented governmental agencies, such as the Dallas Independent School District and the Federal Deposit Insurance Corporation as well as Fortune 500 companies in high-profile controversies where public policy and social concerns collide in the courtroom.

His dedication to the law and spirit of helping others through his legal practice earned Ronquillo the State Bar of Texas President’s Special Citation Award and the National Spirit of Excellence Award by the American Bar Association. He was recently named to the list of the Best Lawyers in America.

Ronquillo has served our community as the General Campaign Chairman for United Way of Metropolitan Dallas and as a board member for the Dallas Area Rapid Transit Agency, Children’s Medical Center, Dallas Museum of Art, KERA Public Broadcasting Corporation, Methodist Medical Center, and the Dallas Arboretum, to name a few.

Ronquillo is the former President of the Dallas Mexican American Bar Association, former National Chairman of the University of Notre Dame Hispanic Alumni Association, and currently serves on the Board of Advisors of George Washington University Law School.

Active in their community, Ronquillo and his wife, Yazmin, a speech therapist with the Dallas ISD, raised their sons Marcos and Adrian in east Dallas. Marcos earned his Bachelor of Arts degree from the University of Notre Dame then graduated from George Washington University Law School as a Dean Kramer Scholar.

Valdaras has had solo exhibitions at Box 13 Artspace in Houston, Cohn Drennan Contemporary in Dallas, Art League Houston, and Janette Kennedy Gallery in Dallas. His work was also included in group shows at Field Projects in New York, Helmuth Projects in San Diego, IHR Gallery at Arizona State University, Oak Cliff Cultural Center, Latino Cultural Center, and Blue Star Contemporary in San Antonio. He is a former member of 500x gallery, one of the oldest co-op galleries in Texas. His work has been featured in the 2013 Texas Biennial and New American Paintings Magazine, issue #108.

Carol Zou
Carol Zou is a Texangelena by way of the Chinese diaspora. Her work focuses on layered human geographies, craft as non-western cultural production, and polyvocality through a community organizing model. Her work ranges from facilitated community collaborations to more personally driven, conceptual works.

Zou is the current project manager/artist-in-residence for Trans.lation, an arts and cultural platform initiated by Rick Lowe and commissioned by the Nasher Sculpture Center, located in the refugee neighborhood of Vickery Meadow, Dallas, Texas. Through resident-led councils, resident-taught workshops, professional development, and pop-up exhibitions, Zou facilitates a space of cultural freedom and self-organization among a diverse and polylingual community.

Additionally, Zou is a founder of Michelada Think Tank, a multi-state alliance of creative workers of color that highlights the need for diversity in the creative fields. Michelada Think Tank has presented at 18th Street Art Center, Open Engagement and is currently in residency at Los Angeles Contemporary Exhibitions.

Zou received her B.F.A. from Cornell University with minors in Urban Planning and Gender Studies, and her M.F.A. in Public Practice from Otis College of Art and Design. She is a 2015 National Art Strategies Creative Community Fellow.

Special thanks to Ro2 Art for allowing us to use the space. Visitors will be able to preview Nomadic Fungi Institute: Spore Sprouting Test opening Saturday, June 25, 6-10.