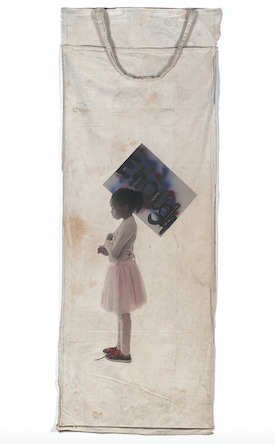 The MAC is pleased to announce its inaugural exhibition, Independence, in the organization’s newly renovated exhibition space at 1503 S Ervay St in the Cedars neighborhood. Independence runs January 12 through February 23, 2019. An opening reception will be held Saturday, January 12 from 6 p.m. to 10 p.m. This exhibition in The MAC’s south gallery coincides with the exhibition, Working Groups, in the north gallery.

Independence is a group exhibition bringing together Texas-based artists Helen Altman, Alicia Eggert, Letitia Huckaby, Liss LaFleur, and Leslie Martinez. How does history inform the present and shape how we view the future? Artists explore the overarching concept of time and the self in relation to society. Works in the exhibition reflect on issues of our times: identity, social dominance, ecological impact, and consumerism.

On readymade vintage chalkboards, Helen Altman captures seemingly ephemeral and detailed drawings of nature. The artist’s use (or reuse) of familiar objects elevates them and draws parallels to our own human predicament. The work invites the viewer to consider their own responsibility, as Altman considers her own, in the face of rapid deforestation and habitat destruction.

Interdisciplinary artist Alicia Eggert considers time and language her primary sculptural materials. Eggert coopts strategies and mediums associated with commercial signage and advertising, and employs them to encourage thoughtful introspection and reflection. Her work struggles to reconcile oppositional concepts of time – the linear and finite nature of human life within the context of a cyclical and seemingly infinite universe.

Letitia Huckaby’s photographic prints on heirloom fabrics explore political ethos and gender issues in our world today. Her work is a time capsule for the African-American experience. In her most recent body of work Huckaby partnered with 19 women of color artists from across the United States and Canada to create their own protest sign that expresses their personal suffrage and prayers for the future.

Leslie Martinez works in the space between painting and sculpture to explore the poetic nuances of transition, fragmentation, perceptual confusion, and parallax through unique hand mixed finishes and substrates. This visual and material language explores psychic and embodied notions of belonging and dis-belonging relating to queerness and border consciousness.

These five local artists work in a variety of media to provide artworks that engage the viewer. The exhibition emphasizes The MAC’s roots as a venue devoted to exhibiting local and regional talent. Locally focused programming will continue at The MAC’s new home at 1503 S Ervay, offering the region a venue where immersive and exploratory works can be presented outside the commercial realm. The MAC will create high profile opportunities for regional artists by exhibiting them side-by-side with artists from afield, setting their work on the world stage.

Helen Altman earned a B.F.A. degree from the University of Alabama in 1981 and an M.A. degree from the same institution in 1986. Altman then entered the graduate program at the University of North Texas in Denton and earned her M.F.A. degree in 1989. Altman’s artwork can be viewed in public and private collections around the country, including the Dallas Museum of Art; the Museum of Fine Arts, Houston; the Museum of Contemporary Art, San Diego; the Kohler Arts Center in Wisconsin, the Art Museum of Southeast Texas in Beaumont, Texas; the Old Jail Art Center in Albany, Texas; and the Grace Museum in Abilene, Texas. The artist is the recipient of several prestigious awards, including the Engelhard Award and grants from the National Endowment for the Arts and the Texas Commission on the Arts. Altman currently lives and works in Fort Worth, Texas.

Alicia Eggert earned a Bachelor of Science degree in Interior Design from Drexel University in 2004, and a Masters of Fine Arts in Sculpture/Dimensional Studies from Alfred University in 2009. Her work has been exhibited at notable institutions nationally and internationally, including the CAFA Art Museum in Beijing, the Triennale Design Museum in Milan, the International Symposium on Electronic Art (ISEA2012) at the Albuquerque Museum of Art and History, Sculpture By the Sea in Sydney, Australia, Artefact Festival in Leuven, Belgium, and many more. Recent solo exhibitions have been held at The MAC (Dallas, TX), T+H Gallery (Boston, MA), Harvard Medical School (Boston, MA), and Artisphere (Arlington, VA).

Alicia is the recipient of numerous honors and awards, including a TED Fellowship, a Direct Artist Grant from the Harpo Foundation, an Artist Microgrant from the Nasher Sculpture Center, an Individual Artist Fellowship from the Maine Arts Commission, and Grand Prize in the Dave Bown Projects Competition. Her work has been featured in The Washington Post and The Huffington Post among other publications.

She is currently an Assistant Professor of Studio Art and the Sculpture Program Coordinator at the University of North Texas in Denton.

Letitia Huckaby has a degree in Journalism from the University of Oklahoma, a BFA from the Art Institute of Boston in photography and her Master’s degree from the University of North Texas in Denton. Mrs. Huckaby has been blessed to exhibit as an emerging artist at the Dallas Contemporary, the Galveston Arts Center, Renaissance Fine Art in Harlem curated by Deborah Willis, PhD, the McKenna Museum in New Orleans, the Camden Palace Hotel in Cork City, Ireland, and the Texas Biennial at Blue Star Contemporary Art Museum. The work is included in several prestigious collections; the Library of Congress, the Art Museum of Southeast Texas, the Brandywine Workshop in Philadelphia, and the Samella Lewis Contemporary Art Collection at Scripps College in Claremont, California. Letitia is represented by the Liliana Bloch Gallery in Dallas and the Anzenberger Gallery in Vienna, Austria.

Liss LaFleur is a contemporary artist, activist, and educator currently based in Denton, TX. Her works have been exhibited and screened extensively including presentations at the TATE Modern, Cannes Court Métrage, PBS, the Reykjavik Art Museum in Iceland, and the Czong Institute for Contemporary Art in South Korea. Her recent lectures include SXSW, the College Art Association, the School of the Art Institute of Chicago, and the MIT Media Lab, and her recent residencies include the National Museum of Glass in Tacoma, WA, and Google Artist Services in Oakland, CA.

LaFleur was born into a family of creative figures in Houston, Texas; her grandfather was one of the first public radio hosts in the south: her grandmother, a beloved opera singer: and her mother, a glass artist. She holds an MFA in Media Art from Emerson College, and currently serves as the Program Director and Assistant Professor of New Media Art within the College of Visual Art and Design at the University of North Texas. She is currently represented by Galleri Urbane Marfa + Dallas.

Leslie Martinez is a multidisciplinary artist born and raised between The Rio Grande Valley of the Texas-Mexican border and Dallas, Texas. They received an MFA from Yale University School of Art in New Haven, Connecticut in 2018 and a BFA from The Cooper Union for the Advancement of Science and Art in New York City in 2008. In the decade between, they worked as a full-time graphic designer in New York’s apparel industry where computer-aided design and garment construction profoundly transformed their image/object construction methodology paving the way for a radically transformed approach to painting. Martinez will continue to develop these emerging forms as a Spring 2019 Artist-in-Residence at Museum of Contemporary Art Tucson. Recent group shows include Heads/Tails at Next to Nothing Gallery in New York City, Way Out Now at Diane Rosenstein Gallery in Los Angeles, California, Kaleidoscope at Kravetz | Wehby Gallery in New York City, and Life and Living presented by Deli Gallery at Hudson Valley LGBTQ Center in Kingston, NY.