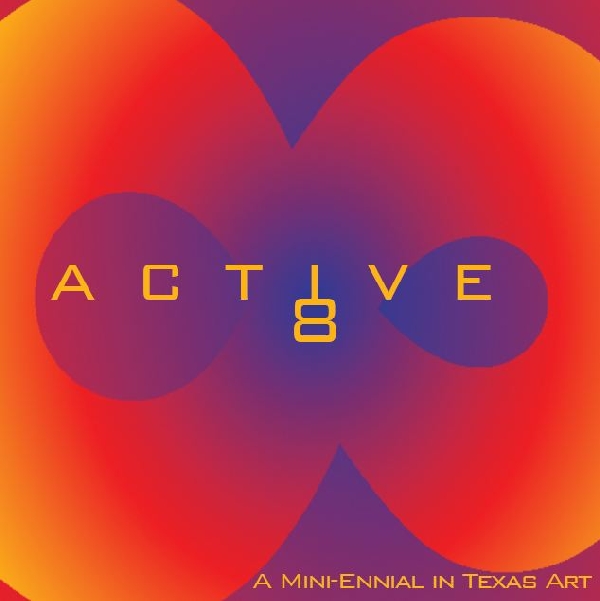 Active 8: A Mini-Ennial in Texas Art

Active-8: A Mini-Ennial in Texas Art should be seen as a small-scale examination of
solutions and/or responses to contemporary concerns by artists from within the
interconnected art world of today who reside and create primarily from within the state of Texas.

Talent from Denton to Brownsville, Houston to Austin, Dallas and San Antonio, all leading voices from within their communities, will merge to exemplify what has always been considered exciting, a “boat load” of cutting edge work with a fresh approach. Each artist represented within this exhibition demonstrates how and what it means to be concerned with new ideas in the 21st Century art world.

Daniel Adame is a performing and visual artist living and working in Houston . He
attended the U of H where he earned his BFA in sculpture.

Cande Aguilar, Jr., from Brownsville is a self-taught artist, and he began his career as a musician at the age of 10 and recorded his first album by the age of 13.

Mario Garcia is pursuing undergraduate degree in visual arts at University of Texas
Arlington and lives in Dallas, TX.

Michael Anthony Garcia received his Bachelor of Arts in Fine Art from Austin College
in Sherman, TX . He now lives and teaches in Austin and is a collaborating founder of
Los Outsiders, a creative and curatorial collective.

Beto Gonzales is from San Antonio. After earning degrees in Philosophy and Art History at the University of Texas at Austin, he studied graphic arts and continues to learn more about new media, including video and animation, as well as continuing his use traditional media.

Ricardo Paniagua lives and makes art in Dallas. His works have been in included in a
two person exhibition at the MADI Museum in Dallas, the 2011 Texas Biennial in Austin, and was recently named a finalist in the prestigious 2012 Hunting Art Prize.