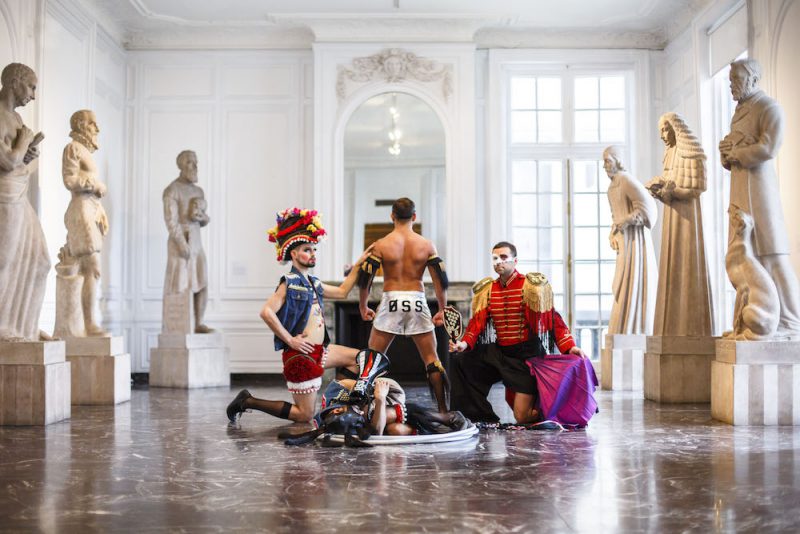 The collective ATOM-r explores 21st century embodiment through performance, poetics, and emerging technologies. Their work mixes the live body with ubiquitous computing, most notably through an implementation of Augmented Reality (AR) in which virtual content is overlaid onto bodies and spaces. ATOM-r was conceived in the image of early modern anatomical theaters, small amphitheaters built for viewing human autopsies and surgical procedures. The collective uses this architecture symbolically to explore the altered and technologically augmented body, to dissect queer histories, and reveal embodied personal narratives.

Cosmic to Corporeal: Contemporary Queer Performance Practices, currently on view through November 9, 2019, seeks to provide an intergenerational, and intersectional exchange of artists who are working to redefine the constructs of performance art and identity, specifically in relation to the queer body and the relationship of the body to technology. Many of the works in this exhibition reach beyond the typical idea of performance art by prompting the viewer to engage or to consider everyday life as an act of performance.

Judd Morrissey is a writer and code artist who creates poetic systems across a range of platforms incorporating electronic writing, internet art, live performance, and augmented reality. He is an Associate Professor at the School of the Art Institute of Chicago in Art and Technology Studies and Writing. From 2006-2009, he worked with the seminal performance group, Goat Island. In 2012, he co-founded the performance, language, and technology collective Anatomical Theatres of Mixed Reality (ATOM-r), with whom he has created two large-scale projects, The Operature (2014), and Kjell Theøry (2017). He is a recipient of a Creative Capital / Andy Warhol Foundation Arts Writers Grant, a Fulbright Scholar’s Award in Digital Culture, and a Mellon Foundation Collaborative Fellowship for Arts Practice and Scholarship.

Mark Jeffery is a Chicago based performance/installation artist, curator and educator at the School of the Art Institute of Chicago. Since 1993 Mark Jeffery has developed unconventional collaborations with visual artists, scholars, video artists, sound artists, new media and code artists, dancers, choreographers, curators, and writers. His works often involve public participation. He is curator of the IN>TIME performance series hosted by multiple venues in Chicago. Mark was a former member of the internationally renowned Goat Island Performance Group from 1996 – 2009. He collaborated and performed in five of Goat Island’s works, touring and teaching extensively across North America and Europe.

Liss LaFleur (b. 1987, Humble, TX) is an interdisciplinary artist who works with video, new media, and performance. Through the merging of digital and physical space, she explores queer identity, the future of feminism, and historical narratives. In 2018 she was named an Immersive Scholar by the Andrew W. Mellon Foundation. Her work has been exhibited internationally, including presentations at the TATE Modern, UK; Cannes Court Métrage, FR; PBS/ POV Digital; the Reykjavik Art Museum, IS; the Museum of Glass, US; Sister Gallery, AU; and the Czong Institute for Contemporary Art, South Korea. LaFleur received an MFA in Media Art from Emerson College, and is an Assistant Professor of New Media Art in the College of Visual Art & Design at the University of North Texas. She is currently represented by Galleri Urbane Marfa + Dallas.