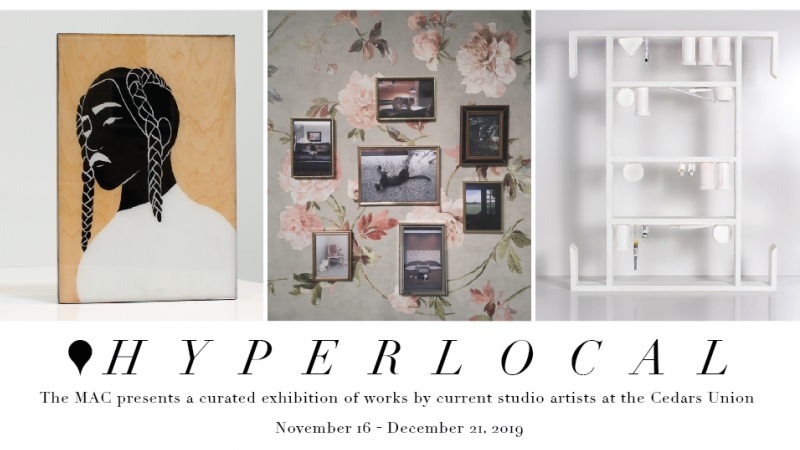 A curated exhibition of works by artists of the Cedars Union

The Cedars Union is a fellow arts nonprofit and one of The MAC’s cultural neighbors in the Cedars. Located less than a quarter-mile away on South Ervay Street, Cedars Union provides resources such as tools, programs, and pro-bono services for creatives; artists of all mediums work side by side in the custom studios, creating a collaborative and supportive community. Both organizations are proud to present this exhibition and showcase the best of the arts in the Cedars neighborhood (often referred to as the artists’ district).

Artistic practices vary from traditional painting, sculpture, and object making to conceptual and light/time-based installation. Although techniques, approaches, and concepts vary greatly between each of the artists, common themes do emerge.

Sheryl Anaya, Fari Rahimi, Kristina Smith, and Desireé Vaniecia reflect on loss and personal struggle. With an emphasis on terrestrial and alien landscapes, Kevin Owens, Carmen Menza and Shawn Saumell, and Laura Lawson focus on ecological issues. Jeremy Biggers, Melissa Turner Drumm, and Joel Murray use painting techniques to address a range of social and cultural commentary. Through representational, abstract, and fantastical approaches, Lauren Tompkins, Riley Holloway, Hatziel Flores, and Jessica Martinez deal with individuality, the familiar, and outside influences on the self.

Sheryl Anaya (b. Puerto Rico 1988) creates large-scale, textile-based installations and works with photography, text, and found objects to explore concepts of identity, personal experience, and memory. Through intimate environments and materials that suggest femininity, vulnerability, and raw emotions, she reconstructs the universal feelings experienced in navigating intimate relationships. Mining a compulsive documentation of her personal life, surroundings, and selective memory, and placing her personal archives on display, Anaya aims to provoke curiosity and empathy while addressing universal themes such as human interaction, communication, and observation.

Jeremy Biggers is an award-winning creator, problem solver, painter, designer, photographer, and filmmaker. Dubbed “Dallas’ Hardest Working Multi-Hyphenate” by D Magazine, from drawing to painting to graphic design to photography to videography, Jeremy Biggers has been involved with image making his entire life. He attended Booker T. Washington High School for the Performing and Visual Arts where he primarily focused on expression through graphite and charcoal drawing. During his college years he cultivated his love for painting and photography, since cemented themselves into his everyday life. As with most artists, his work is shaped by experiences that inform his view of the world. His goal with each piece is to inspire conversation. His work mixes realism with a design aesthetic.

Hatziel Flores is a self-taught, contemporary artist from Dallas, Texas. He was born in Mexico City and has been doing art since a very young age. His passion is to paint in a wide variety of mediums. His diverse collections consist of explosive contemporary mixed media paintings portraying the beauty found within chaos. Internally driven and emotionally charged he continues to explore and convey his ideas. His visions are unique and unlimited.

Riley Holloway is best known for his dynamic work and fresh look at figurative art. His images are often accompanied by text and other personal references embedded within the work. Holloway uses a bold painterly technique to create depth within the portraits. There is a softness he translates accompanied with his wild markings. This is seen with his utilization of charcoal and hand drawing, in conjunction with his ability to control and manipulate oils in a traditional process. There is also a wonderful counterbalance of roughness and masculinity seen in the works. This is accomplished with his utilization of the “unfinished” aspects of the image and the rawness and utilitarian nature of many of the panels, gessos and nails he works upon.

Holloway’s aesthetics create familiar spaces that are rich in storytelling, free from constraints, and true to his subjects. Holloway’s technique is undeniable and his content is rich in both drama, history and intimacy.

Laura Lawson is an artist based in Dallas, TX. Her research centers around the changing nature of landscape as both a physical entity and a source of identity, using everything from satellite imagery to literature to inform her works in painting, drawing, installation, and sculpture. She was selected for a two-month artist residency in Marnay-sur-Seine, France. Her work has been exhibited locally and internationally, and she currently serves as an educator in Dallas-Fort Worth area colleges.

Jessica Martinez was born and raised in the central valley of California. She began studying art her final year of college, and pursued a masters degree in printmaking at the University of Dallas where she studied under Juergen Strunck. As an artist she has worked to hone her skills in printmaking and drawing, while developing her conceptual practice. Alongside working out of her studio she is currently the International Baccalaureate, and AP art teacher at Woodrow Wilson High School where she spends time devoted to aspiring young artists.

Carmen Menza is an interdisciplinary artist whose practice spans video, light sculptures, music and public art installations focusing on generative visuals and sound. Her professional background includes a career in broadcast television as an editor, graphics designer and director. Her films have screened at the Dallas International Film Festival, Austin Film Festival, Experiments in Cinema Festival, Albuquerque, New Mexico, Dallas Aurora, Dallas VideoFest and on Dallas, TX PBS/KERA. Her software based light work is part of the permanent collection at the McKinney Avenue Contemporary Museum in Dallas. She has exhibited with the Perot Museum of Nature and Science, the Dallas Symphony Orchestra’s Soluna Festival, the Dallas Aurora Light Festival, The Women’s Museum, Dallas, TX, The Museum of Geometric and MADI Art, Dallas, TX, and is represented by Carneal Simmons Contemporary Art, Dallas, TX. She received her BFA in jazz guitar performance from the University of North Texas.

A native of Dallas, Kevin Owens honed his skills and received his BFA in painting from Stephen F. Austin University. Owens has been a resident artist with La Reunion TX and City Square; working on community based public art projects. As well as a Teaching Artist, improving young minds creatively in underserved neighborhoods with several North Texas not-for-profit arts organizations.

Fari Rahimi was born in Tehran, Iran. At age 19, she relocated to the United States; where she became proficient in realism, expressionism and contemporary assemblage techniques involving two and three dimensions. She achieved success in painting, sculpture, and print making as an undergraduate student at Cameron University, and was one of the top three painting studio majors in the entire university. During her time at Cameron, Rahimi was the only student accepted to display her work at the prestigious Leslie Powell Centerfold Exhibit. After earning her BFA, Rahimi lived in Venezuela, where she worked with renowned sculptor Alberto Cavalieri. In the fall of 2013 Rahimi completed her MFA in Sculpture at the University of North Texas. She is currently residing in Denton, Texas and has a studio space at The Cedars Union.

Shawn Saumell was born in New York and currently lives and works in Dallas, TX. He received an MFA from Lesley University College of Arts and Design (formerly known as The Art Institute of Boston at Lesley University), magna cum laude. Saumell’s work has been featured in over 150 exhibitions worldwide and has won many international awards including, but not limited to: “First Place,” “Director’s Choice,” “Photographer of the Year,” “Best of Biennial,” “100 Best International,” “Top 50 MFA Painters in America,” “Top 25 International Fine Artists,” and “Best of Show.” His work is in the collection of the Boston Public Library, Boston, MA; The State of New Mexico, NM; the Limner Gallery, Hudson, NY; Shah Alam Gallery, Malaysia; Center for Fine Art Photography, Fort Collins, CO; and the Mulafoco Museum, Uruguay.

Kristina Smith holds an MFA with distinction in Photography from Texas Woman’s University in Denton, TX and a BFA in Studio Art: Photography + Spatial Arts from Youngstown State University in Youngstown, Ohio. Smith currently resides in Dallas, TX, where studio time is juggled alongside multiple freelance opportunities, teaching photography and computer art courses across the DFW Metroplex, caring for many plants and a chinchilla named Roxie, and performing with the arts collective, Spiderweb Salon.

Smith’s work has been exhibited regionally, nationally, and internationally in venues such as Rayko Gallery, Form & Concept Gallery, and the Midwest Center for Photography.

Lauren Tompkins studied Interdisciplinary Art at the University of North Texas (UNT), where she graduated in 2018. Her work has been shown in various galleries and platforms in DFW, including Lightwell Gallery, Aether Space, Envision Arts, and The MAC. Her work has also been published in the Denton Record-Chronicle and Dallas Style & Design. Lauren’s artistic practice is expansive and incorporates a wide range of different media, including illustration, sculpture, video, and installation. Her current work is a study of influence and identity and explores the constant transformations a person’s identity goes through while still maintaining a core identity. She often incorporates reflective substrates and materials into her practice at her studio in the juried space, The Cedars Union, in Dallas, Texas

Melissa Turner Drumm  is a painter and printmaker by education and while at the Cedars Union has spent her time exploring making sculpture. By using the 3d printer to refine ideas and make molds this has led to lost wax bronze casting and more recently faster drying materials. From fertility talismans, trophies and awards her work celebrates family in it’s many stages using reductive forms.

Turner Drumm was awarded the City of Dallas Arts & Cultural Vitality grant in 2019 and is working on outdoor sculpture for the Cathedral of Hope Chapel by Philip Johnson in Dallas, Texas and the Poydras Corridor in New Orleans Louisiana.

Desireé Vaniecia was born in Dallas, TX. She relocated to her home city after receiving her Bachelor’s in Graphic Design and English at McMurry University in Abilene, TX. Growing up, she developed an early interest in art, encouraged by her young mother who often would take her on trips to see art around Dallas and who in the end pushed her to attend college for art. In anticipation of her son being born in 2016, Desireé reflected on her upbringing and struggles she endured in both her adolescent and adult years, creating artworks that reflected those emotions.