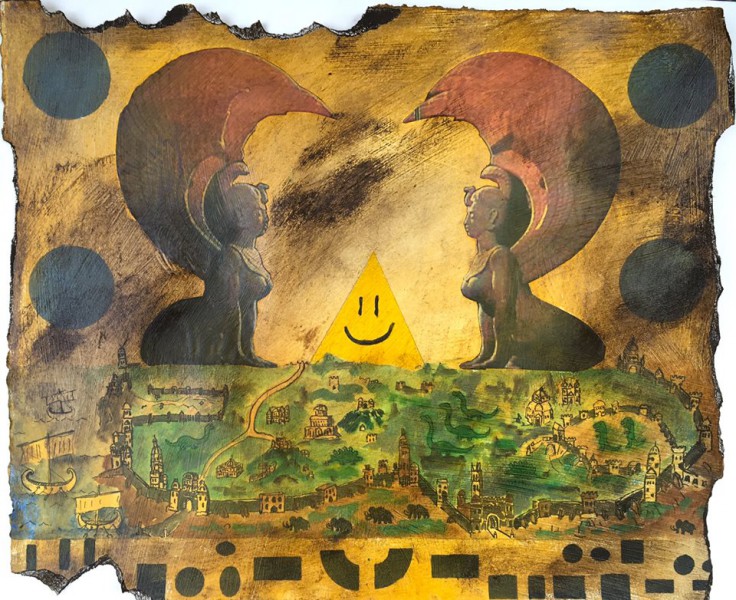 The MAC is proud to present Outhouse Oracle, an installation and archaeological performance by artist Joshua Goode. The exhibition will be on view February 18 through March 11, Saturdays 12-3 or gladly by appointment. In partnership with students from the Department of Sociology and Anthropology at the University of Texas at Arlington, Goode will conduct an excavation at The MAC on Saturday, February 18 at 4:00, followed by an opening reception from 6-9.

Goode’s installation and archaeological performance at The MAC misinterprets and manipulates history and mythology, preserving the artist’s own memories of childhood, the achievements of major historical figures, and exposing the malleability of our past, present and future. Inspired by amateur archeologists such as Heinrich Schliemann who discovered Troy and by past elaborate hoaxes like that of the Piltdown Man, Goode’s “discoveries” verify his invented civilization. The archaeological performance and installation begin with extensive historical research, and result in absurdly comical discoveries and false claims, which engage the history of the region. The actual and fake objects “found” during previous digs have been exhibited in Spain, Germany, Russia, Croatia, Egypt, Italy, China, Belgium and the US.

Joshua Goode received his MFA from Boston University and has participated in residencies in Russia, Germany, Finland, Spain and was a researcher on an archaeological dig for the University of Tubingen at Vogelherd Cave in Germany. He received the Dozier Award from the Dallas Museum of Art and is currently the Chair of the Fine Arts Department at Tarrant County College in Fort Worth, Texas. Goode is represented by Ro2 Art in Dallas and will have a solo exhibition there in the fall. His ‘artifacts’ have been exhibited in solo exhibitions in international venues such as the Razliv Museum, St. Petersburg, (Russia); Capellades Museum, Barcelona, (Spain); Zendai Museum of Modern Art, Shanghai, (China); Darb 1718 in Cairo, (Egypt); LaSala Gallery, Zaragoza, (Spain); Galerija Miroslav Kraljevic, Zagreb, (Croatia); Borey Gallery, St. Petersburg, (Russia), and the Monchskirchein Museum, Salzwedel, (Germany).

The MAC Mission:
The MAC is a nonprofit organization that stands as a Dallas advocate for creative freedom offering the opportunity for experimentation and presentation of art in all disciplines. It supports the emerging and established artist’s role in society by providing a forum for critical dialogue with their audiences. This relationship is cultivated through education and innovative programming.