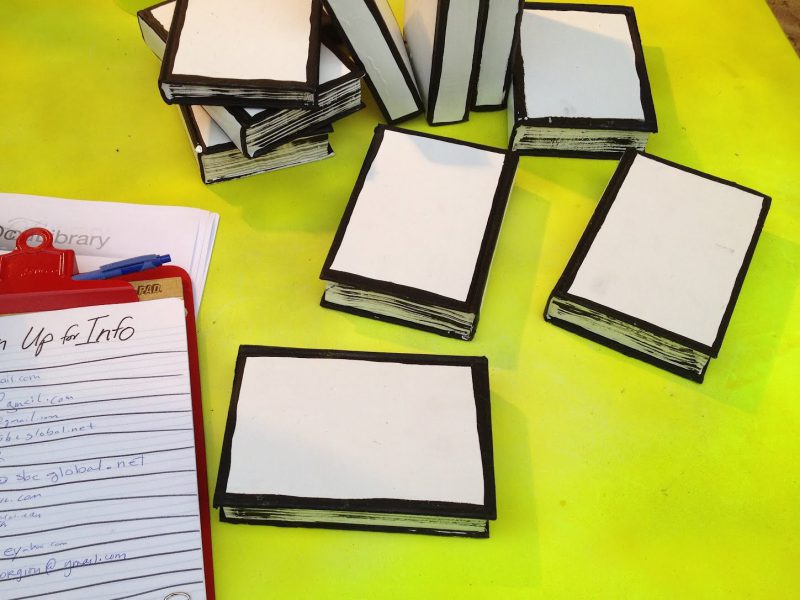 On Saturday, November 3, 7PM-12AM visitors to The MAC will get a sneak peek of The MAC’s newly renovated exhibition space prior to the official opening. As part of the sneak peek, The MAC will host a preview of an exhibition by Carolyn Sortor and Michael A. Morris entitled Working Groups, celebrating a permanent installation of the OccuLibrary project at The MAC. The preview of Working Groups includes the GlamROccuLibrarymentary Trailer Shoot 2, a participatory event in which members of the public are invited to be videotaped reading their selection from a compilation of brief yet inspiring quotations from great thinkers.

The OccuLibrary project was initiated in 2011 following the eviction of Occupy camps across the U.S. and the destruction of the libraries that had spontaneously sprung up within the camps (more than 3,000 books were lost in New York City alone). The project was conceived as a rolling collaboration in which the destroyed libraries were to be reincarnated in various formats, “using aesthetically-informed strategies to lure awareness toward empowering info.”

Through donations by the artists and many others, a physical library was assembled for use in the various OccuLibrary reincarnations, and these materials now find their permanent home at the MAC, where they will be available for use by the public. The library comprises books on art, politics, economics, philosophy and other subjects as well as fiction, zines, drawings, and other materials.

The new exhibition, Working Groups, contextualizes the library and reviews some of the accomplishments of the Occupy movement and its offshoots, seeking inspiration and “empowering info” for next steps in both art and “reality.”

Working Groups is created by Carolyn Sortor and Michael A. Morris with contributions from various Occupy “working groups” and others (particular thanks to Akshat Tewary for his work highlighting some of the changes made in the Volcker Rule in accordance with the “Occupy the SEC” group’s 325-page comment letter).

These exhibitions and events coincide with AURORA 2018: Future Worlds at Dallas City Hall on Saturday, November 3, 7PM-2AM. The MAC invites the public to park in the Cedars and enjoy the walkability of the historic neighborhood on the way to the main AURORA 2018 event. The suggested route starts at The MAC, where visitors can grab a map, then venture north to Cedars Union and onward to Dallas City Hall.

Carolyn Sortor explores systems, dimensionality, and socio-political relations using video, relational strategies, and other media. Her work has been shown in New York, San Francisco, Houston, Dallas, Albuquerque, and elsewhere at venues including the Dallas Museum of Art, the Nasher Sculpture Center, and the Contemporary Art Museum of Houston. Her videos have won juror and audience awards, most recently including first prize at the Aurora Picture Show Extremely Shorts Festival, and in 2013 she received a Dallas Observer Mastermind award.

Michael A. Morris is an artist and educator based in Dallas, Texas. His work responds to the rapid changes in how moving images are created and experienced in the 21st century, affirming the traditional space of experiencing cinema while also exploring the implications of new media. He has performed and screened his films and videos at museums, galleries, microcinemas, and film festivals internationally, including events at Boulder Museum of Contemporary Art, The International Symposium of Electronic Art in Vancouver, Oak Cliff Film Festival, Chicago Underground Film Festival, San Francisco Cinematheque, and the Texas Biennial.