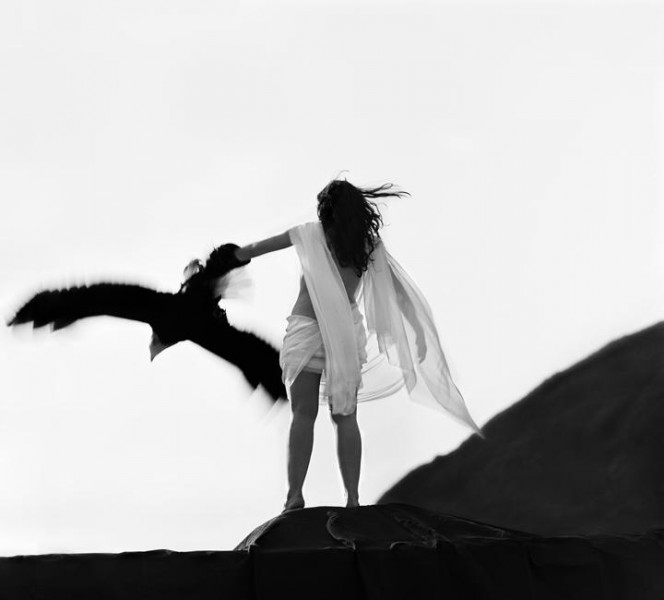 Joy Laville: The First Fifty Years
Award-winning Mexican artist Joy Laville presents a retrospective exhibition of her works over the past five decades by marking her first in Dallas in more than 30 years. During the 1980s, Laville’s four exhibitions in Dallas attracted many collectors who have treasured her work and can now see the evolution of her painting over five decades. A new generation can discover this singular artist, whose painting, they will observe, is like a river: always the same, always different.

Age has neither slowed Laville down nor diminished the strength that imbues her work.  The uniformity of the fifty works in the exhibition reveals how at age 91, the artist paints as well as, if not better than, in 1962, the year of the first work in the MAC show. Her characteristic pastel colors, which belie the power of the landscapes or the immediacy of the women she paints, render an environment where events develop, where she observes them happening, without judgment or opinion.  A woman lying between two rocks in front of the sea is presented, as simply another element in the universe. A woman has dropped her book after falling asleep in a lazy afternoon. A seascape seems timeless until we notice what is barely perceptible—two figures standing below the path of an approaching dark cloud. For Laville, each of these moments of knowing takes place in a weave of time, space, and light.

Born in England in 1923, Joy Laville arrived in Mexico in 1956, without a plan of how long she would stay. After marrying the writer Jorge Ibargüengoitia, she made Mexico her home and now lives in the town of Jiutepec. Following Ibargüengoitia’s death in an airplane accident in 1983, Laville began making paintings related to the accident. The paintings are as subtle as they are present: As she stands embracing a bouquet of flowers, a falling airplane is shadowed in the background. She paints herself with only one eye open; it is too much to see with both eyes. Despite being sought after by collectors, she is equally respected as a painter’s painter. In Mexico, she has been the recipient of every major award, from the acquisition prize by the Instituto Nacional de Bellas Artes in 1966, to the prestigious Premio Nacional de Ciencias y Artes, presented by the Mexican Senate, and the Bellas Artes Medal, both awarded in 2012. Joy Laville’s work has been exhibited throughout the United States, Mexico and Canada, and in London and Paris, and hangs in numerous private and public collections.

Noted art historian and patron Salomon Grimberg, Dallas, is curator of the fifty works in the exhibition. He is widely published in the field of Latin American art and is well known for his expertise on Frida Kahlo. The artist and curator are expected to attend the opening reception.

This exhibition is presented in partnership with The Mexico Institute in Dallas.

Chuck & George’s work is most often autobiographical. They state: “Our interests are revealed through the exploited humor and beauty of ourselves and loved ones. We shamelessly admit to using this unflattering portraiture as a way to explore our vision of reality, and of course admit to using mockery as a devise. The artistic exploration begins with the identification of a theme and the investigation of it with various forms of media, usually painting, printmaking, sculpture, animation and ‘constructions’. With these tools, we approach our subject as something to be promoted, similar to an advertising campaign, or a public health service. Common threads throughout our career is storytelling, 80’s pop songs, vintage television, kittens, comics, art history, domesticity, childhood, love and violence.”

The artists will be in attendance at the opening reception.

Garduño will exhibit selected works from her photographic publications, including Trilogy.

Trilogy is a collection of the works Garduño realized throughout many years of photography in Mexico and Europe. Her great and magnificent visual production develops through a “dance” in three movements. The overture is Bestiarium, in which real and fictional images of enchanted animals come to life as metaphors of our dreams and passions. Then we have Fantastic Women, a celebration of the feminine universe and of the mystery and sensuality that spring from the female body. The dance ends with Silent Natures, where Garduño contemplates wilderness because, quoting the photographer herself, “Whenever I think of Silent Natures, I must confess that I created these photographs for myself, to maintain my playful spirit throughout all these years.”

Garduño was born in Mexico City in 1957. When she was five years old, her family moved to a hacienda 25 km from the capital city where she lived in close contact with animals and nature. She studied visual arts at the Antigua Academia de San Carlos (UNAM) from 1976 to 1978 where she focused on the search for structural aspects of form and space. While there, Garduño studied with Hungarian émigré photographer, Kati Horna, who had escaped from Europe during World War II. Horna’s work, which focused on the effects of World War II on women and children, blended both straight and surrealist photography, and had a profound influence on Garduño.

Two other significant experiences shaped Garduño’s style and career. The photographer left school early to work as a darkroom assistant for Manuel Alvarez Bravo, the most influential Mexican photographer of the 20th century. She perfected her photographic skills by processing prints in silver, platinum and palladium. In 1981, she began working for the Secretariat of Public Education. Under the direction of photographer Mariana Yampolsky, Garduño traveled to rural villages throughout Mexico with a team of photographers and artists seeking subjects to illustrate primary school textbooks for indigenous communities. Yampolsky who had worked with Manuel Alvarez Bravo in the 1940s, was known for the humanistic approach to Mexican culture in her photographs, which usually featured women and vernacular Mexican architecture. These experiences gave Garduño the opportunity to learn about rural Mexico, especially the plight of indigenous peoples, and helped hone her own unique style, which infused descriptive photography with mystical archetypes characteristic of Mexican Surrealism. Today she is known for her haunting images of native peoples throughout the Americas, along with her symbolic nudes and still-lifes.

Garduño lives in Tepoztlan, Mexico and is represented by Patricia Conde Gallería in Mexico City. The artist will be at the opening reception along with gallery director Patricia Conde.