An opening reception will be held Saturday, November 8, 2014 from 5:30  to 7:30 pm at The McKinney Avenue Contemporary, located at 3120 McKinney Avenue, in the Uptown District of Dallas.

Exhibitions will be on view through December 20, 2014.

This year, The McKinney Avenue Contemporary (The MAC) will celebrate 20 years in operation at 3120 McKinney Avenue. The MAC opened as an alternative exhibition space in 1994 as the first venue in North Texas where contemporary art in all disciplines could be explored under one roof. With exhibitions by more than 300 regional, national, and international contemporary artists, The MAC is home to some of the most inspiring, challenging and riveting art in Dallas and North Texas.

For the past twenty years, The MAC has maintained its important mission to stand as a Dallas advocate for creative freedom, offering the opportunity for experimentation and presentation of art in all disciplines. The MAC is honored to be a platform for the many artists in our region and to have introduced so many national and international artists to our thriving artist community.

Featuring Houston based artist Chris Cascio, Current Obsessions will be The MAC’s second annual MAC PAC Sponsored Exhibition. The MAC PAC, Patrons + Artists Collective, is a group of active MAC enthusiasts with a passion for contemporary art who seek an opportunity to meet others who share similar interests and would like to enhance their knowledge of the current art scene. The MAC PAC members are involved in special projects at The MAC such as the Exhibitions and MACtivities Committees.

Cascio was chosen as the recipient of this year’s one-person exhibition in the New Works Space out of 15 artists nominated by The MAC PAC Exhibition Committee members. The selection process included a panel discussion reviewing each of the artist’s work by The MAC’s Board of Directors and a vote held by The MAC PAC at large.

Cascio’s exhibition will explore themes of collecting, hoarding, addiction, ritual practices, and commercial branding through an installation of paintings, collages and transfer drawings based on his most current obsession. Exploiting his compulsive tendencies, Cascio will completely transform the gallery into a space that blurs the line between passion and pathology by aestheticizing a hoard of items surrounding an idea or issue. Meticulously saved remnants from Cascio’s process of cutting and organizing images into categorical compositions will surround the artwork along with other items acquired during the works’ creation including source material, art supplies, production cast-offs, beer bottles, and other objects relating to the installation. 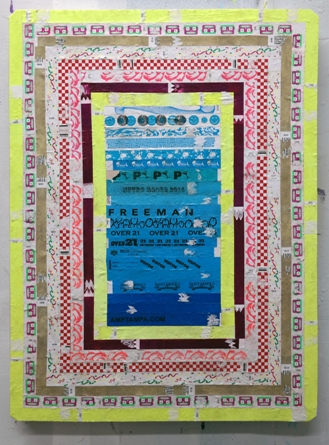