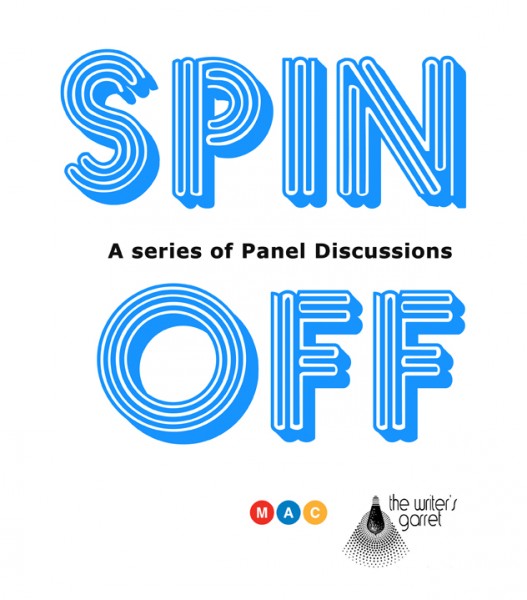 This fall, The MAC and The Writer’s Garret will continue congruent educational outreach initiatives to present Spin Off, a series of multidisciplinary panel discussions giving audiences a rare opportunity to get involved in those larger conversations that continue to define contemporary art, its practice, its theory, its history, and its meaning. Discussion topics are inspired by current MAC exhibitions and are tied loosely to themes and ideas presented in these exhibitions. By bringing together panels consisting of a diverse collection of scholars, critics and artists working across various fields of study, Spin Off will thoughtfully explore the most exciting and influential ideas and trends in today’s art.

The first installment of Spin Off delves into Residency Programs. Panelists Matt Bondurant, Gabriel Dawe, Ben Fountain, Sally Frater, and Philip Kelleher will gather to discuss the relevancy of residency programs across various fields of study. This panel discussion will be moderated by Lisa Taylor.
Matt Bondurant
Matt Bondurant was born and raised in Alexandria, Virginia. He received his B.A. and M.A. in English from James Madison University, then went on to earn a PhD in English – Creative Writing from Florida State University. He is the author of three novels. His second novel, The Wettest County in the World is currently being made into a film by Director John Hillcoat (The Road) starring Shia Labeouf, Tom Hardy, Jessica Chastain, Mia Wasikowska, Gary Oldman, and Guy Pearce, to be released in 2012. Matt has recently held residencies at Yaddo and the MacDowell Colony.

Gabriel Dawe
Originally from Mexico City, Gabriel Dawe creates site-specific installations that explore the connection between fashion and architecture. His work has been exhibited in the US, Canada, Belgium, and the UK. After living in Montreal, Canada for 7 years, he moved to Dallas, Texas, where he obtained his MFA at the University of Texas at Dallas. For the final two years of his degree, he was an artist in residence at CentralTrak, the Artist in Residency program at UTD. He is represented by Conduit Gallery in Dallas, and by Lot 10 Gallery in Brussels. Among his upcoming exhibitions are a solo show at Conduit, and a group show at the Chelsea Marlborough Gallery in New York.

Ben Fountain
Ben Fountain is the author of a short story collection, Brief Encounters with Che Guevara, and a novel, Billy Lynn’s Long Halftime Walk. He grew up in North Carolina and has lived in Dallas, Texas, since 1983.

Sally Frater
Sally Frater holds a BA in Studio Arts from the University of Guelph, a post-graduate diploma in Museum Management and Curatorship from Fleming College and an MA in Contemporary Art from Sotheby’s Institute of Art/The University of Manchester. Sally Frater is currently a critic in residence in the Core Program of The Museum of Fine Arts, Houston.

Philip Kelleher
Philip Kelleher received his MA in art history from Binghampton University in 2011 and his BA from Providence College in economics in 2006. Kelleher has worked as Collections Assistant at Everson Museum of Art in Syracuse, New York and interned at the Whitney Museum of American Art. Philip Kelleher is currently a critic in residence in the Core Program of The Museum of Fine Arts, Houston.

Lisa Taylor
Lisa Taylor is the owner of Taylor-Made Press, a consulting service dedicated to promoting culture of all kinds. She is also the Executive Director of the Dallas Art Dealers Association. She currently serves on the board of the Video Association of Dallas and the Greiner Advisory Board. She is part of DISD Leadership class of 2012. She has served on the Board of Directors for La Reunion TX Artist Residency in Oak Cliff.